The amount of oxygen and other gases circulating through your blood during exercise gives a fairly good indication of how effectively you're taking in and processing oxygen. By extension, this can provide you with a means to measure your physical capabilities, particularly when it comes to endurance events like long-distance running.

The clinical term for blood oxygen levels is actually oxygen saturation. That's significant because it provides a basis for you to understand the numbers that are used to describe how much oxygen is in your blood. In reality, the numbers produced by measuring equipment will be in the form of a percentage, which represents the amount of red blood cells in your blood that are filled with oxygen. When your blood doesn't have enough oxygen, it's known as hypoxia.

In the most thoroughly controlled situations, these percentages report both arterial (oxygen-rich blood headed toward your muscles) and venous (oxygen-depleted blood rushing back toward your heart) numbers.

What the Numbers Mean

If you notice consistent levels from 86 to 90 percent, you may need to see a doctor, or your meter may not be measuring accurately. Test it on a few other subjects to see if the meter measures their oxygen levels as low, as well, to determine whether you need to seek medical attention, or you're just experiencing technical difficulties.

How the Numbers Change

When arterial numbers are normal, usually about 95 to 100 percent, you're breathing in and using plenty of oxygen. These numbers generally stay unchanged during moderate intensity exercise and may even increase a little with the intensity, suggesting you're breathing faster and therefore taking in more oxygen. With more vigorous exercise, you may note a small drop in blood oxygen levels of about two to three percent if your respiration doesn't continue to bring in enough oxygen to meet your body's current needs. In this case, you may notice levels as low as 92 percent. However, when you stop exercising, these levels will return to your normal reading. The better shape you are in, the more quickly you will see these levels return to normal range.

Interestingly, venous measurements are always quite a bit lower than their arterial counterparts. However, this makes sense since this represents the blood that has already had the oxygen extracted. Logically, then, your venous blood oxygen levels gradually decrease as the intensity of your workout increases, showing that your body is using the oxygen you're taking in.

Oxygen, apart from all of its other vital roles in the body, is required for fast, efficient energy production. Granted, your body can still burn fuel without oxygen, but this method is slow, inefficient, and a little clumsy.

If your arterial oxygen levels remain high during exercise, this is a good indication your body is well-adapted and can continue to bring in and process enough of the gas, even when you're working at high intensities. Low blood oxygen levels could also be a signal of certain health conditions, in addition to a low level of fitness.

There are multiple approaches to measuring blood oxygen levels. 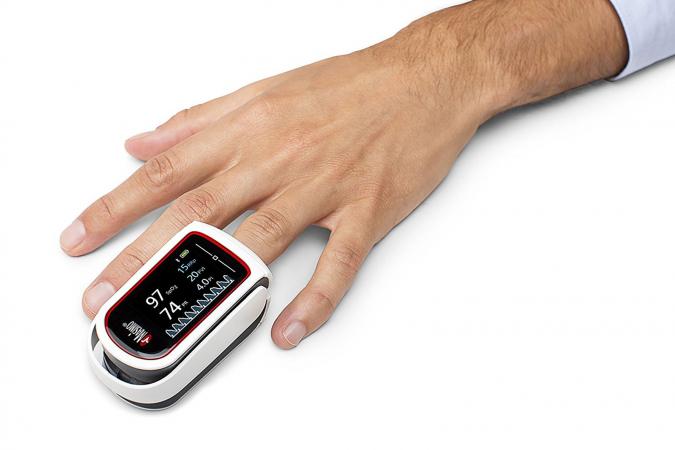 The most commonly used method of measuring blood oxygen levels in hospitals is a small device - resembling a clip - called a pulse oximeter. The oximeter is placed on a small, translucent part of your body like a finger tip or ear lobe where there isn't a whole lot going on. By shining a light through your skin to a sensor on the other side, the device very cleverly uses the color of your arterial blood to estimate the amount of oxygen contained within.

Pulse oximeters can range anywhere from about $15 for a FaceLake FI400 to $400 for a professional-grade Massimo MightySat.

This same technology can now be found in both fitness trackers and cellphones with varying degrees of reliability. Fitness trackers, which you generally wear on the wrist, can encounter problems though. After all, there are bones, muscle, connective tissue, and veins in the wrist that can all distort the reading the device produces. When smartphones attempt to use this technique, it's usually accomplished by having the user place a finger tip over the flash and camera lens.

For most people, either smart phone apps or wearables will be the tool of choice for measuring blood oxygen levels while exercising. As mentioned, however, this may not be reliable. It should be noted this application of pulse oximeter technology is fairly new and really hasn't been well studied. In fact, many of the apps are made by interested developers who got their hands on the formulas used by professional pulse oximeters.

In laboratory settings, researchers will sometimes go so far as to place a catheter in specific arteries and corresponding veins to get a direct measurement of the amount of oxygen contained in the blood. This procedure, though, is highly invasive and can only be done by trained professionals with specialized equipment.

What To Look For

Even without a device to measure your blood oxygen levels officially, however, there are fairly distinct symptoms to look out for if you're concerned that your levels might be too low. Primarily, you will feel light-headed, dizzy, and short of breath. You may even experience a loss or dimming of vision. If you feel any of these symptoms, immediately stop the exercise.

If you continue to feel that way for an extended period after your workout has ended, or if the symptoms arise even without a workout, see your doctor as soon as possible.

Should You Measure Your Oxygen Levels?

Unless your doctor recommends you should, there really isn't much of a reason to measure and track your blood oxygen levels regularly. In the age of quantified self, though, you may choose to out of sheer curiosity. Ultimately, while blood oxygen levels are a pretty important marker of health, you can easily spot symptoms of low levels. Plus, you aren't likely to have low levels unless you're also dealing with some other health condition or are taking certain medications. That being said, you may be curious to know just how well your body is using all that oxygen you're taking in. For those casual purposes, a wearable tracker or cell phone app should be able to give you all the information you need.