When it comes to building strength and muscle mass, resistance training is a must. While the sky is the limit when it comes to choosing exercises that will target the muscles in the chest and arms, variations on the bench press are especially effective.

1. Warm-up by walking on the treadmill, riding a bicycle, or engaging in another form of aerobic exercise for five to ten minutes at a moderate-intensity.

2. Perform two sets of eight to ten repetitions of the barbell bench press.

3. Perform two sets of eight to ten repetitions of the close-grip bench press.

4. Perform two sets of eight to ten repetitions of the dumbbell bench press.

6. Cool-down by walking on the treadmill, riding a bicycle, or engaging in another form of aerobic exercise for five to ten minutes at a moderate- to low-intensity.

To perform a barbell bench press, the American Council on Exercise encourages individuals to lay on an exercise bench with their feet flat on the floor, the barbell directly over their eyes, and their shoulder blades pressed into the bench.

Aside from hand position, the close-grip bench press is very similar in nature to that of the barbell bench press. In fact, in Exercise Testing and Prescription (page 274), the American College of Sports Medicine notes that exercisers should position themselves as they would when performing the more basic version of the exercise. Instead of gripping the bar with your hands over your shoulders, however, bring them closer together on the bar so they are over your armpits. 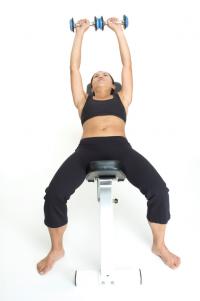 As suggested by the name, the dumbbell bench press varies from the barbell and close-grip bench press due to its use of resistance training equipment. Instead of a barbell, exercisers will rely on dumbbells to perform this exercise.

For optimal results when doing the dumbbell bench press, lay on an exercise bench with your feet flat on the floor and a dumbbell in each hand, recommends the American Council on Exercise. Hold the dumbbells with your palms facing forward, and your thumbs wrapped around the handles. 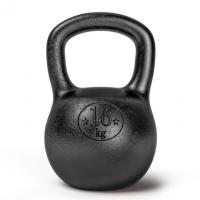 As with the dumbbell bench press, the alternating kettlebell bench press relies on the use of alternative resistance training equipment. According to Bodybuilding, a kettlebell is a cast iron ball with a handle attached that provides unbalanced weight and requires exercisers to incorporate the use of accessory muscles during their workout.

While beginning exercisers can get a great burn with the exercises described above, individuals who are more advanced in the gym may require a tougher workout. To make these exercises more difficult, consider the use of a pyramid workout - or one in which the amount of weight that you lift increases, and the number of repetitions that you perform decrease, with each subsequent set. With this technique, exercisers generally perform a higher number of sets - even as many as six - which is a significant increase from traditional workout regimens.

Decreasing the amount of rest time between each set can also make the workout more difficult. Cut rest times down to 30 to 45 seconds to really stress working muscles and give yourself a more strenuous workout.

Finally, try incorporating additional muscle groups into your workout when performing these exercises. Putting a yoga mat down on the exercise bench, for example, can make your work surface less stable, and will require you to engage accessory muscle groups such as those in your abdomen and lower back. Be sure to use a spotter the first time you incorporate this technique, to avoid possible injury or accident.

Get Buff With the Bench Press

The bench press, close-grip bench press, and dumbbell bench press are all great resistance training exercises for beginning and advanced exercisers alike. For a full-body workout, be sure to include eight to ten exercises that target all major muscle groups in the body, including the back, legs, and core muscles.